Clarence Clemons is a music legend and a member of the Rock & Roll Hall of Fame. He spent 30 years “back to back” with Bruce Springsteen as a founding member of the E Street Band. When not fronting the E Street Band, he played shows across the world with The Grateful Dead and Ringo Starr’s All Star Band as well as collaborating with industry titans like Aretha Franklin, Jackson Browne and Lady Gaga.

When your nickname is the “BIG MAN” it helps that you are 6’5” tall and over 250 LBS! However, Clarence Clemons didn’t get his nickname just because of his stature…he earned it through the bigness of his personality and generosity of his heart. He was a true original that loved to share his passion for living life to the fullest.

To this day, through his family, his friends, his band mates and his rich and raucous sax solos, the Big Man remains an inspiration to everyone seeking to overcome the challenges of a limited life by stretching boundaries and following their passion.

A message of hope that still resonates today.

Video of the Month 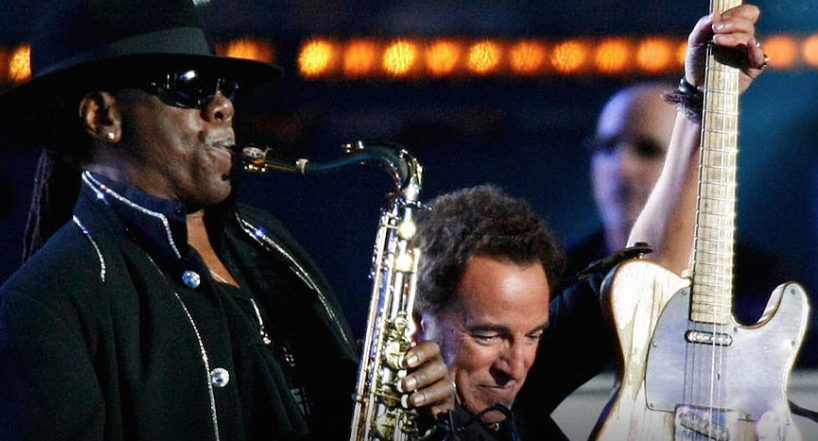 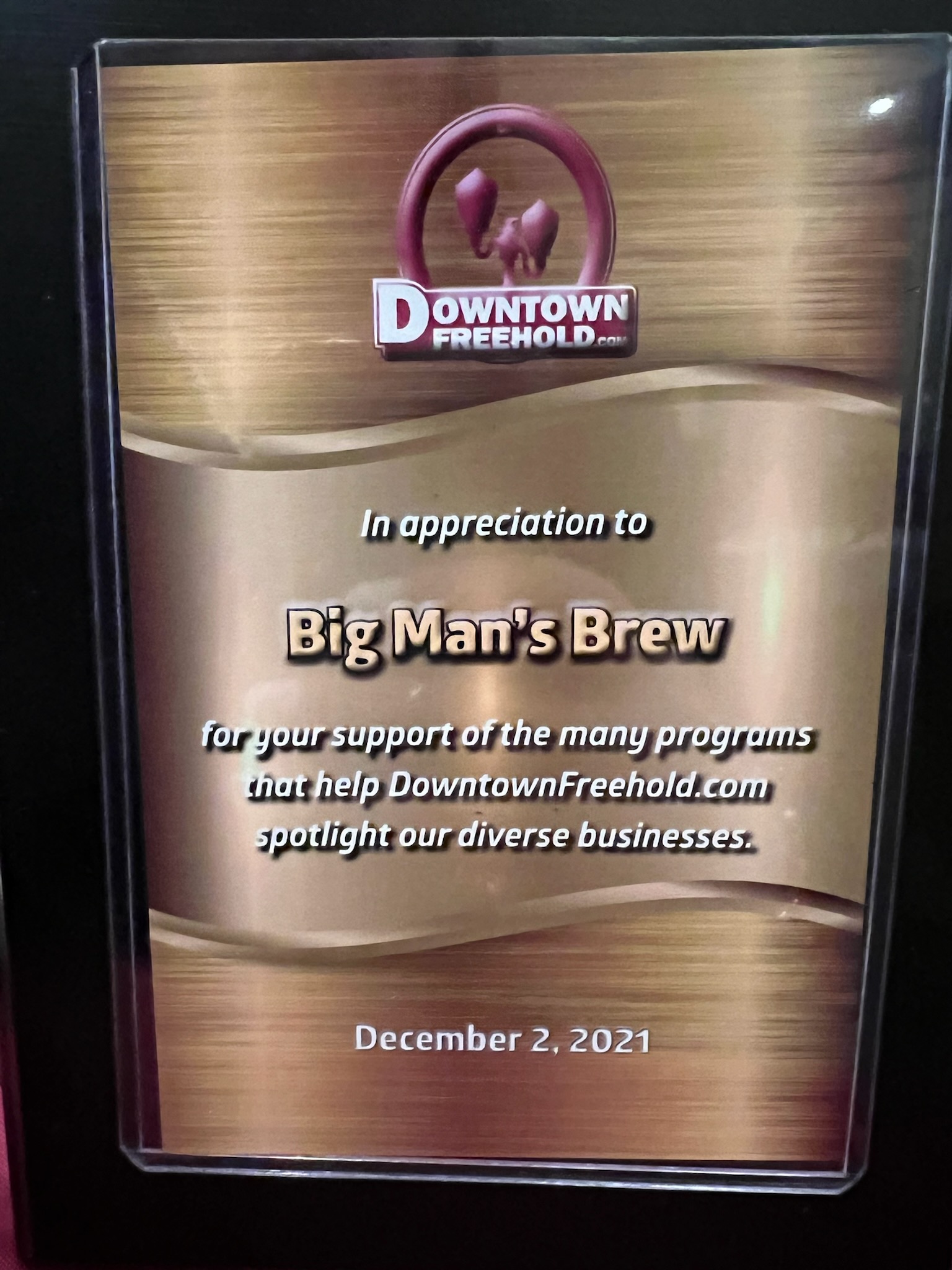 BIG MAN’s Brew was formed as a tribute to Clarence Clemons.

But, our tribute had to be different. It wasn’t simply a walk down memory lane…that’s been done. It wasn’t about educating everyone on the arc of his life…that’s also been done. For us, the only way to pay tribute to the BIG MAN is to celebrate his legacy by providing tangible experiences that will help his friends, fans and family reconnect with his indomitable spirit and the beauty of a life lived BIG!

That’s why we created and launched our HAZY Groove IPA. It’s not just another IPA…that’s been done. Our IPA is made in the spirit of the BIG Man, unique in its bold yet approachable taste and surprising in its refreshing citrus notes that leaves you begging for more…just like a classic BIG MAN sax solo!

Over time we plan to launch new beer styles and new beverage products that will continue to amplify his larger than life personality and showcase the breadth of his many passions.

Please join us on our journey to celebrate the BIG MAN’S legacy. As Clarence said, “This could be the start of something BIG!”

BIG MAN’s Brew has assembled a premier team of business leaders with extensive experience managing large, consumer facing brands in both the Total AlcBev (TAB, includes beer, wine, and spirits) and non-alcoholic market. The Leadership team shares a successful track record of building businesses in the U.S. and globally and are committed to protecting and preserving the legacy of Clarence Clemons, the BIG MAN! 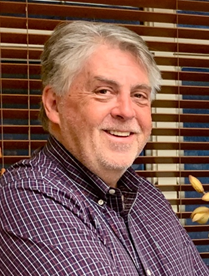 Erv Frederick is the founder and managing partner of Winnetka Park.  He has had a 28 year career at Kraft and SAB Miller, and completed the merger of South African Breweries and Miller to form SAB Miller.  He’s responsible for leading multi-billion dollar businesses including Maxwell House and Miller Lite.  He’s created value for brands through M&A / Alliances as part of a management team that purchased CapriSun.  He has established a distribution partnership with Starbucks and is the founder and managing partner of CreativeScale.  Select Clients include Unilever, Jim Beam, Miller Coors, Crown Imports owned by Constellation Brands, Tenth and Blake Beer Company, Pinnacle Foods, and Bloomin Brands.  He earned his MBA from Kellogg School of Management, Northwestern University; BA at Dickinson College. 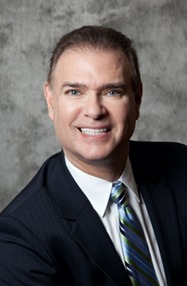 Chairman of the Board of Directors

Dr. Rosen has been a nationally known, board-certified, Plastic Surgeon for the past 30 years. During this time, he has been a serial entrepreneur with a proven leadership track record of success in founding and presiding over a variety of healthcare organizations. “Doc” has particular skills in matters of brand marketing, corporate compliance, and governance, as well as organizational structure and management. He was one of the founding partners of Big Mans Brew™ and recruited a world-class group of passionate, talented individuals to help preserve and honor the legacy of Clarence Clemons. 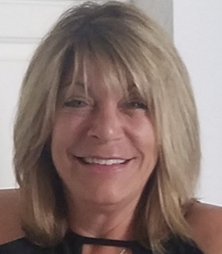 Beth Fromkin is the co-founder and co-managing member of Fromkin Energy, LLC.  She has a penchant for corporate fundraising and was Executive Director of Banking and Finance, leading the merger of 16 independent limited partnerships into one parent company. They completed and operated 138 natural gas wells and 107 oil wells with an estimated geological net recoverable reserves value of 160 million dollars.

She was a co-partner in Fromkin Enterprises International, specializing in the building and implementation of home-based marketing and sales models for both direct and internet sales for seven years. For this, she received the prestigious Ruby Level of Success Award and recognized by the Harteis Organization for her public teaching and speaking skills in the area of home-based marketing. She is passionate about the “Big Man” and brings a critical business skill set to our team. 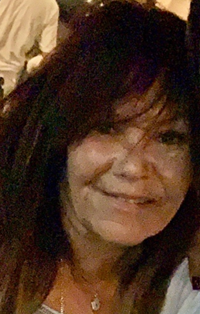 Barbara holds a BA degree from the University of Miami in communications, journalism, and marketing. She founded and operated a multi-million dollar retail design and manufacturing enterprise in New Jersey. Before that, “Barb” owned several retail food service establishments in New Jersey, and Palm Beach, Florida. As one of the Founding partners of Big Mans Brew™, and with a vast network of contacts in Southern NJ, she has been successful in managing public relations and promotional events, throughout the state since our launch in July 2019.

Working for a myriad of Fortune 100 companies over the past 20 years, Mike has served in leadership in both sales, marketing, and advertising roles. He was also instrumental in the development of a startup digital marketing company, which is an information and engagement platform for consumers. His passion for the Big Man compelled him to form Big Mans Investment Group, which has helped provide critical funding for Big Mans Brew™. His vast experience with both startup ventures and publicly traded entities has been an invaluable asset for our Board. 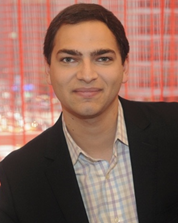 One of the top account representatives for a publicly traded global company in New York City, Josh, brings experience and strategic perspective to our sales team. He is also a beer aficionado and a drummer who graduated from Colgate University with a minor in music. Having performed at the Stone Pony on numerous occasions, he saw first hand the powerful legacy left by the Big Man. He joined our team with a passion for Clarence’s music and the skill set needed for scaling the growth of Big Man’s Brew™ to broader markets.

Larry Weil is the founder of Unitrust Solutions; a full service distressed Asset Buyer and Collection agency. His career in the Credit and Collections Industry spans 23 plus years. Before forming Unitrust, Larry Built another agency from 5 to 150 agents doing 40 Million a year in gross revenues. In 2010, his company was acquired by a larger firm, and after his restrictive covenant ended, he formed Unitrust Solutions. In the last two years, this entity has grown exponentially.

Larry Earned A BS in Business Management at Susquehanna University and was a 4-year letter winner for the Varsity Basketball team. He was a Professional Basketball Player in the European Professional Basketball league from 1981-1983 and continued as a high school basketball coach after that. He found that most of the techniques he used in coaching also apply to the business world. He excels at keeping his employees engaged and highly motivated.

The high density of fans in the northeast United States as a catalyst for global recognition of Big Man’s Brew among Clarence Clemons’s 50 million global fans. 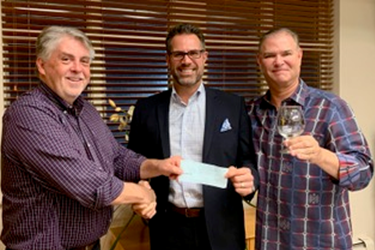 Dr. Allen Rosen, Chairman of the Board of Directors, on the right, holds the new logo tulip beer glasses revealed for the first time last night.

Erv Frederick, Company CEO and President, on the left receiving the check on behalf of the company

Want to Learn More? Get in Touch with us Today 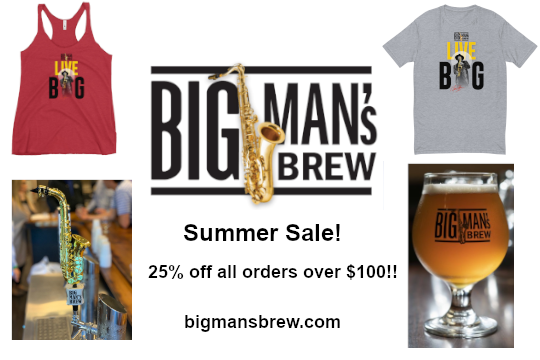